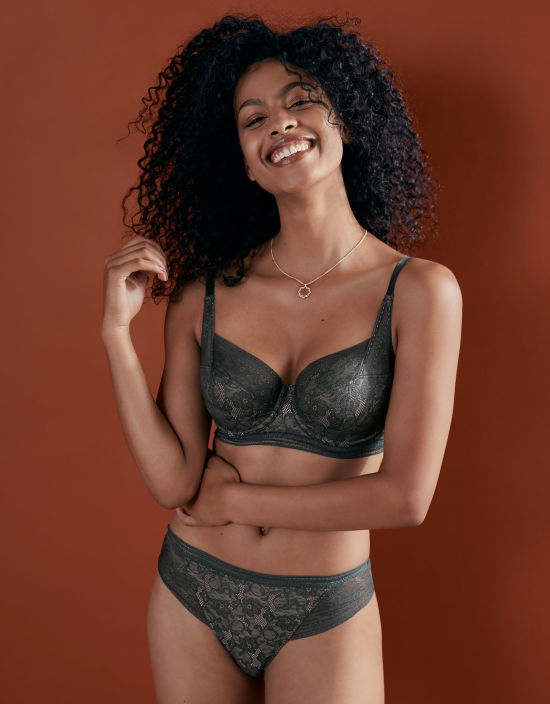 This is a brand new all-over stretch lace balconette with a side sling, and it is oh-so-comfy! The gorgeous lacy cups have a stretch lining so they mould to your unique shape – great if your boobs are different sizes or if you fluctuate during the month. Even the underband is stretchy so no digging in or rolling up - hooray! LN597SAG
22GBPInStock
3.99

This is a brand new all-over stretch lace balconette with a side sling, and it is oh-so-comfy! The gorgeous lacy cups have a stretch lining so they mould to your unique shape – great if your boobs are different sizes or if you fluctuate during the month. Even the underband is stretchy so no digging in or rolling up - hooray!

Unsure what size to buy?
write a review
3.9 out of 5 starsfrom a total of 9 reviews

FitAverage rating: 4.1 out of 5 stars

True to sizeAverage rating: 4.4 out of 5 stars

I love this shape bra and was very happy with the initial fit. But I quickly realized the band was too loose so a week in I already had it on the second row. Now a few months in I only wear it lounging at home. It is way too stretch any my shoulders have to take over the job of the main band. Really disappointed as its so pretty on.

Why on, God's slowly being destroyed Earth, would you design a band like that? That was the most uncomfortable thing I have ever put on. I had this thing on for three minutes spent half trying to straighten that stupid bottom of the band before I gave up and put it on fully, immediately took those uncomfortable straps back off (they barely sit on my shoulders) went back to fiddling with the band and straps when I just gave up on it and took it off. The band actually left a scratch on me. Plus this see-through fabric is so thin and delicate I highly doubt it'll last longer than three months. Definitely returning it.

This bra was a surprising find. I have one boob slightly bigger than the other so I have to go for bras with lace on the top to accommodate. Not only does it have enough stretch to fit properly it is still really supportive and pretty, which is hard to find when you get to a K cup. Best bra I've had in a long time. The stretch that makes it so comfortable to wear did mean that I had to order it in the next size down so it would still fit after I wore and washed it a couple of times. Just wish they made it in more everyday colours.

I ordered 3 bras, not holding out much hope but wow! All 3 were amazing! This one is so soft and the shape it gives my boobs is wonderful. It was also in the sale so an absolute bargain for a well fitting, comfortable, good looking bra.

This bra is gorgeous! It's a teeny bit too shallow for my projected/full on bottom + center-full breasts, but I'm keeping it because it's so lovely. One other issue I have is that the very bottom of the band rolls up; would LOVE if they fixed this issue. I don't think it's going to bother me much, but we'll see...

Love love love this bra! I'm a 36F and I've always worn Panache which I love but this is even better - please can your do it in more colours? I've bought sage which is lovely but need nude to go under lighter tops. Highly recommend this bra. Pulls them together so they don't spread out and it's sooo comfy!

Probably the comfiest bra I’ve owned and that’s a big statement as I’m usually a fan of more structured bras with thin padding for security. The lace is so pretty and I love green anyway (not to everyone’s taste!). Gives great support and looks lovely on. Good shape under a top! Need another one in a different colour really!

More colored please! I LOVE it.