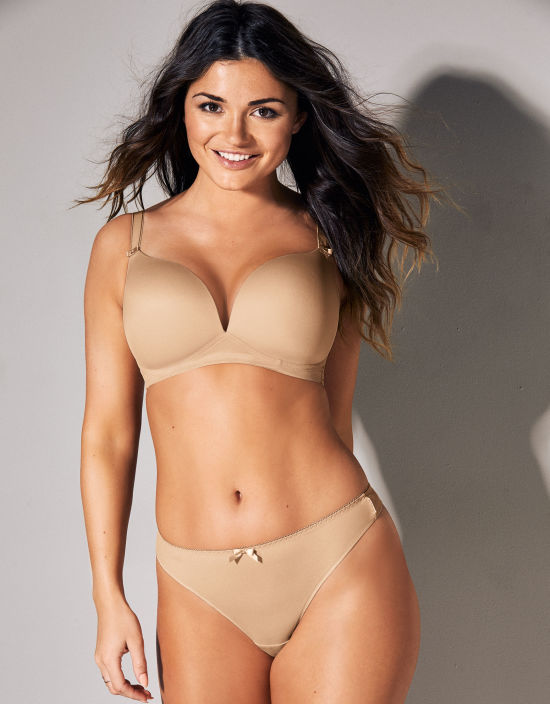 We’re happy to offer a non-wired moulded style for Bravissimo girls. This lightly padded plunge style is based on the same shape as [Deco Plunge](/products/deco-bra-black-fyn2bl/) but without underwires, so it gives a softer fit without compromising on support (or cleavage!). It has a low centre front which makes it a great option for wearing under low-cut tops. For other super [comfortable bras](/collections/comfortable-bras/), check out our collection!FY121NUD
29GBPInStock
Deco Non-Wired Non Wired Bra in Black by FreyaBlackFreyahttps://www.bravissimo.com/products/deco-non-wired-bra-fy121/#black-fy121blk

We’re happy to offer a non-wired moulded style for Bravissimo girls. This lightly padded plunge style is based on the same shape as [Deco Plunge](/products/deco-bra-black-fyn2bl/) but without underwires, so it gives a softer fit without compromising on support (or cleavage!). It has a low centre front which makes it a great option for wearing under low-cut tops. For other super [comfortable bras](/collections/comfortable-bras/), check out our collection! FY121BLK
29GBPInStock
3.542

We’re happy to offer a non-wired moulded style for Bravissimo girls. This lightly padded plunge style is based on the same shape as Deco Plunge but without underwires, so it gives a softer fit without compromising on support (or cleavage!). It has a low centre front which makes it a great option for wearing under low-cut tops.

For other super comfortable bras, check out our collection!

Unsure what size to buy?
write a review
3.5 out of 5 starsfrom a total of 42 reviews

FitAverage rating: 3.4 out of 5 stars

StyleAverage rating: 3.9 out of 5 stars

True to sizeAverage rating: 3.7 out of 5 stars

I would highly recommend this to anyone. It give great lift and support and is really comfy. I though the shape was a little funny when I first tried it on but now I have worn it a couple of times the slight pointyness seems to have gone.

I love Freya and wear the underwired plunge bras. Got this one for my pregnancy and it is the most uncomfortable bra. It rubs round the ribs and doesn’t support. My non-wired bra from a different bra is so much better.

I recently popped into the Manchester store for a fitting and to purchase some much-needed new bras, which was definitely overdue! Claire, my fitter, was absolutely fantastic. I knew that I wanted padded plunge bras as these fit my shape the best and are the most comfortable. I requested an assortment of brands in nude and black and I was open to trying a non-wired bra. I am so glad that I did! This bra does everything, it is extremely comfortable yet supportive and gives a great rounded shape! I will definitely purchase it in black. I also purchased three other bras that day. I vary from a 28G to a 28GG cup depending on the brand.

I bought this after an instore fitting in early June and found it very comfortable at first. I bought a 38FF but now find it is too big. I am not sure if it has stretched but I am on the last hook I am trying to lose weight but am not sure I have gone down a bra size so quickly. I have another bra I wore at the same time and although I have altered the back hooks I am not on the last hook. It seems to mark easily and in the hot weather I found a lot of sweat marks at the end of the day. I washed it once and one of the cups split and no I didn't hand wash it but it was on a delicate wash and not spun. I would say get a fitting then try it and go back if it is not right I wasn't able to do this but I think it could be a comfy bra with the right fitting

My 14 year old has been wearing these everyday for a year or so now when we could no longer find anything on the high street to fit her 28F, she is at smaller end of 28 ideally needs a 26 band but that is not going to happen! These are softly padded/moulded and comfortable and no wires to worry about. It is quite low cut at the front but on 28F it dos not create too much cleavage. My daughter wore it to dance classes an she did not fall out of it. It does not show under T shirts and has lasted well wash after wash in lingerie bag in machine. The bottom of the cups do have a tendency, as someone else mentioned, to fold over a bit at the bottom but I think this is due to lack of underwiring.

I was worried this soft moulded bra might have a 'bucket' look under teeshirts - but absolutely not - it makes a very nice shape, and the plunge style is probably the reason that the bucket look is avoided [ie the look of having two enormous upturned buckets stuck to your chest!] It's fairly comfy - haven't worn it all day yet and it's possible the band under the bust might ride up a bit and chafe - it's quite narrow. Also - due to the deep plunge - the boobs are only just contained, so not a bra to wear if you are going to the office or going dancing! There's not a huge amount of support in the middle. But for a nice, fairly slimming line under teeshirts, and a nice lift too - this bra can't be beaten. If I wanted more support, I might go for the underwired version though.

I bought this as I wanted a non-underwire bra, stupidly thinking this might be more comfortable...I've since decided that actually underwires seem better! It looked fine when I put it on and is comfy for a few hours, but after that the slight crease which appears in the bottom of the cup/band gets really uncomfortable - gravity is obviously too much for this bra! I have tried tightening the straps to pull the cups up but to no avail and I've checked in the mirror and the fit looks fine. I kept it as it is nice for relaxing around the house. It is also fine if you are doing no more than a very casual stroll - try anything more than a slow walk and there is noticeable bounce; I only wear it out under a loose-fitting jumper!

Bought this instore after a fitting. Thought the shape and support was great for a non-underwired bra but after a few wears, I noticed the bottom of the bra (where the underwire would usually be) had started to bulge out and would rub, leaving me with red marks and bruises underneath my boobs! The bra seems to collapse under the weight! Now I can only wear this occasionally rather than everyday as I had intended. It's a shame because it looks so nice on.