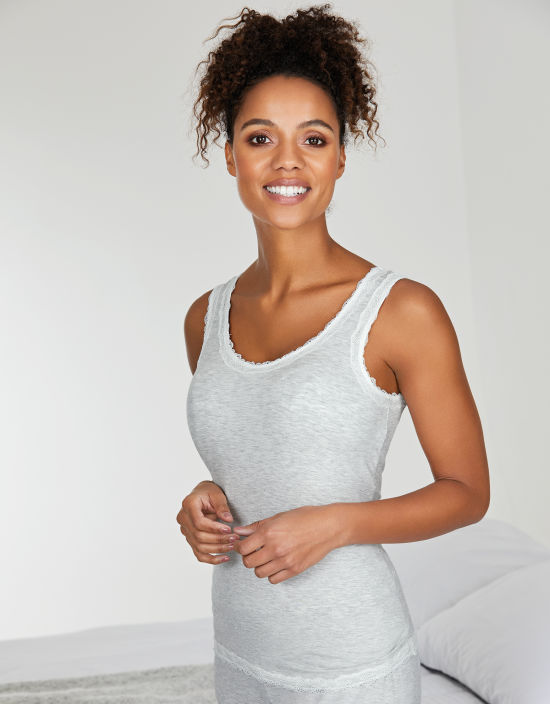 A soft and stylish pyjama top with the all-important built-in bra support inside to keep you feeling secure. You tell us this style is so easy-to-wear, and we hope you’ll agree that the lace trim adds a touch of elegance as you sleep or lounge! NW250GML
15GBPInStock
4.39

A soft and stylish pyjama top with the all-important built-in bra support inside to keep you feeling secure. You tell us this style is so easy-to-wear, and we hope you’ll agree that the lace trim adds a touch of elegance as you sleep or lounge!

write a review
4.3 out of 5 starsfrom a total of 9 reviews

FitAverage rating: 4.7 out of 5 stars

True to sizeAverage rating: 3.3 out of 5 stars

One of the best things that ever happened to me. So comfy and cute! I don't use it as pyjamas, but as a home t-shirt that gives me support, looks nice and doesn't take away any of the comfort of lazy days.

Generally I love Bravissimo nightwear, it's something I've come back to time and time again for over a decade (which is saying something!), and always have a few tops on the go. I even sometimes wear them on long journeys by plane/car, and don't have issues to be seen in them in public unless they're more obviously lingerie-like. This one has the white lacy trim, which does make it more like underwear in my opinion. The material is super soft, however, it doesn't last - after one year of regular use my old top has quite a lot of pilling (but I like it so much I just bought another one). I do wish Bravissimo went back to using cotton though, I still have some tops from 5 or 6 years back which have perhaps faded, but apart from that - no issues. Modal or viscose are just not durable unfortunately. In the old nightwear sizing, I usually wore a 28F-G (am normally 30E-F in bras + 28F in Freya), and was a bit wary of the 28FF-G as suggested by customer service - but it fits like the old ones did.

It’s so comfortable and easy to wear I’ve even brought a second one. It’s very supportive and true to size. I just wish that Bravissimo would do a 28 back in the normal vests too!

I suspect that the lace trim is intended to add a feminine touch to this vest top rather than the chunky look it has but it is sooooo comfortable and supportive I've decided to keep it anyway. I'm a 30E but, based on previous PJ tops, ordered two sizes for comparison. I've kept the 30D. Slimmer shoulder straps next time please Bravissimo.

This is the holy grail of comfort tops. It gives a good shape and is very pretty. I'll be wearing it, as well as the same style in cornflower blue, as a vest for daytime wear until Bravissimo makes daywear vests with integral bras without underwires!

I was so sad when it fit so poorly. I have a sleep bra in the same size the vest is clearly smaller in cup size. I’m a 36G/80G and it was like cramming my boobs into a DD cup. The material is soft and comfy, but the cup size is really small, and the vest’s top half fits poorly. The back size is just right. The cut becomes too low and the straps are in the wrong place. The bottom half is soft and flows flatteringly over the body. I recommend trying it on in a shop first or ordering at least one cup size up.

Super comfy, soft and supportive. Perfect for lounging or sleep.