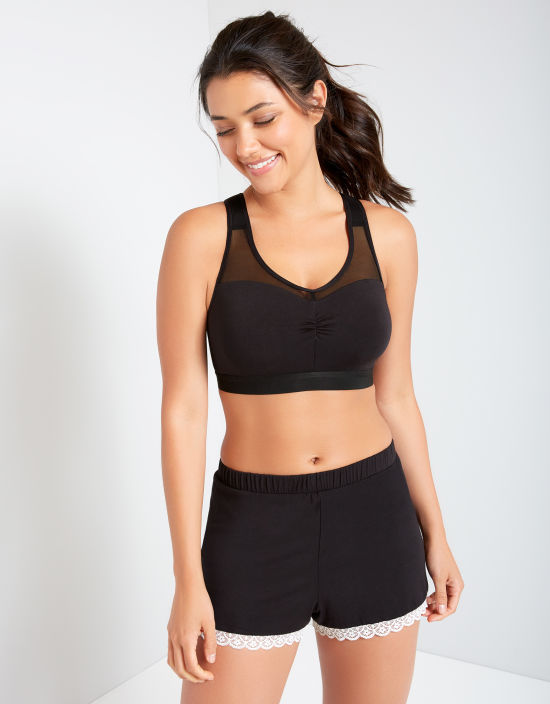 We're delighted to be able to offer our Racerback Sleep Bra in black. If you haven't tried it, our sleep bra is based on the built-in bras found in our nightwear tops. It's a non-wired, racerback style made with a soft, breathable fabric with light padding on the shoulder straps to make sure you're really comfortable in it through the night. The sizing works across three cup sizes as the fit of our sleep bra is more accommodating than a standard bra. If you'd like any help working out the right size for you, please give us a call and we'll be really happy to help.NW216BLK
15GBPInStock
3.436

We're delighted to be able to offer our Racerback Sleep Bra in black. If you haven't tried it, our sleep bra is based on the built-in bras found in our nightwear tops. It's a non-wired, racerback style made with a soft, breathable fabric with light padding on the shoulder straps to make sure you're really comfortable in it through the night.

The sizing works across three cup sizes as the fit of our sleep bra is more accommodating than a standard bra. If you'd like any help working out the right size for you, please give us a call and we'll be really happy to help.

We offer FREE standard delivery on all UK orders, and returns within 90 days.

Unsure what size to buy?
write a review
3.4 out of 5 starsfrom a total of 36 reviews

Fit & supportAverage rating: 3.4 out of 5 stars

StyleAverage rating: 3.4 out of 5 stars

True to sizeAverage rating: 0.5 out of 5 stars

This bra takes a little bit to get on but once on it keeps them in place. When you first take off in the morning, you seem to have a bit of an uplift, I love it.

I had hoped to find a comfortable wire-free bra to wear around the house - something much lighter than a sports bra but also with no lace or fiddly bits. This looked to be exactly what I was searching for but the fabric is very scratchy. I keep trying it on in the hope I’ve somehow misjudged it but just can’t stand it against my skin. It also doesn’t fit at all - in so many ways it’s hard to understand whether it’s too small or too big. It’s hard to imagine how breasts are supposed to fit into it at all!

I love this sleep bra, so soft and comfortable, believe it or not I actually wore it during day it was so supportive I am now ordering another one

I love having a bra for lounging around the house in. Previously I had used a great 'yoga bra' which I got from Amazon for €6, but when I needed a new one, I thought I'd pay a bit more and get better quality. Sadly that wasn't the case. Firstly, the bra is not comfortable to put on. Secondly, there is no support underneath, in fact the band isn't tight against my body, no matter which hooks I use. Perhaps trying to create a bra that accommodates 3 different cups sizes, just isn't possible.

It looked nice on and fitted well, I bought a band size up for comfort. Definitely couldn't sleep in it though. Racerback is not comfortable, had to take it off in the middle of the night as I had sore neck from it. TMI, but also found it quite sweaty and boobs squished together. Wish I could return for the non racer back version, but too late now. Expensive mistake.

I was so thrilled to find a sleep bra in my size, as I have never seen one anywhere else before! If anyone could use a comfy, supportive option to lounge around the house in, it's certainly the well-endowed among us. The material is really silky feeling and it doesn't chafe or leave any marks on my skin. After owning this one for a while, I have a couple of suggestions for things that can be improved. The bra should definitely be a little "taller" like another reviewer suggested. I have a lot of volume in my chest, so the band is obscured underneath my breasts instead of hitting lower across the torso like it does in the picture. A wider band would make it look at LOT more attractive in larger sizes. As others mentioned, this bra does flatten the chest a little. I actually like this aspect because it makes it more comfortable. The weight of my chest is supported horizontally across my back instead of by the straps, so it doesn't make my shoulders ache like most halters or sports bras without an underwire do. The problem with the squishing aspect is that the bra spans the space between each breast and does not "tack" against the ribcage like a properly fitting underwire would. On someone like me who has close-set breasts, there is nothing there to separate them from each other and the skin-on-skin contact can create an uncomfortable heat rash. Because of this, I can't sleep on my side or wear it for more than a few hours if the weather's hot or I'm doing something active. If the bra was divided into more distinct cups or there was a little panel of fabric to separate on the interior lining, it would completely eliminate this problem. I could even imagine wearing it to a yoga class! All of these observations also apply to the racerback tank, as the interior bra is very similar. Overall though, I am very happy to have found something so comfortable for when I need a break from the more serious marvels of engineering, but don't want to go totally braless.

I am often very uncomfortable lounging around and sleeping and when this arrived I was so excited to try something out. Its super comfortable, supportive and I cant imagine not having it. Highly recommend.