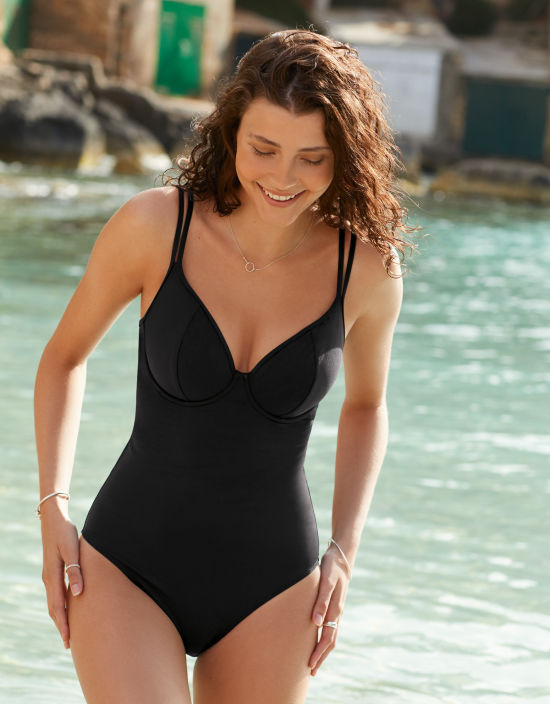 This printed swimsuit has non-padded plunge cups which give you a rounded shape, while the smoothing tummy control makes the most of your fabulous figure. The outer layer is made from an eco-friendly fabric and the split straps and silver rings add a special touch – it’s the details that make the difference!SW284BLW
54GBPInStock
Amalfi Swimsuit Plunge Swimsuit in Black by BravissimoBlackBravissimohttps://www.bravissimo.com/products/amalfi-swimsuit-sw284/#black-sw284blk

Rest assured that this swimsuit will keep everything in place, whether you're doing the butterfly or just lounging by the pool. The plunge cups and smoothing tummy control make the most of your fabulous shape. If you love the Amalfi, you may want to try the [Amalfi Frill](/products/amalfi-frill-swimsuit-black-sw618blk/) - the fit and shape are the same!SW284BLK
54GBPInStock
Amalfi Swimsuit Plunge Swimsuit in Navy by BravissimoNavyBravissimohttps://www.bravissimo.com/products/amalfi-swimsuit-sw284/#navy-sw284nvy

Rest assured that this swimsuit will keep everything in place, whether you're doing the butterfly or just lounging by the pool. The plunge cups and smoothing tummy control make the most of your fabulous shape.SW284NVY
54GBPInStock
Amalfi Swimsuit Plunge Swimsuit in Navy White by BravissimoNavy WhiteBravissimohttps://www.bravissimo.com/products/amalfi-swimsuit-sw284/#navy-white-sw284nvw

This non-padded plunge swimsuit will keep everything in place, whether you’re lounging by the pool or lapping lengths! The smoothing tummy control makes the most of your fabulous shape and the split straps and silver ring detail adds something a little special, too. SW284NVW
54GBPInStock
3.839

Rest assured that this swimsuit will keep everything in place, whether you're doing the butterfly or just lounging by the pool. The plunge cups and smoothing tummy control make the most of your fabulous shape.

If you love the Amalfi, you may want to try the Amalfi Frill - the fit and shape are the same!

Fit & supportAverage rating: 4 out of 5 stars

True to sizeAverage rating: 2.5 out of 5 stars

Firstly, can I just say that the shipping was incredible. I purchased this three days ago for my holiday and it just came today. Majority of my life I have not found a swimsuit that would suit my figure and also support my boobs. After endless try ons at many shops, I was going to give up but then I took a gamble on this swimsuit with no reviews. I can honestly say as the first review, I love it soo much. it supports my boobs so well and it also shows my figure. I have ever bought a more flattering swim suit ever. I am also not the skinniest of my friends and as I am going on holiday with them I wanted to feel beautiful and this swim wear makes me feel exactly that. It is honestly a miracle!

I ordered this swimsuit after reading the very good reviews. It was delivered this morning. When I tried the swimsuit on I was very disappointed to find that the back strap was impossible to clip together to secure my 36G bust. The body of the costume was baggy and offered no support to my tummy. The cups fitted but were uncomfortable. I will return for a refund.

Lovely swimsuit, very flattering colour and style in a 30G. It's a good fit and I feel secure and comfortable without feeling frumpy. Perhaps a tiny bit larger in the cup and slightly shorter in the body would have made it perfect for me at 5'5". The straps are at full stretch on me and I love the split strap detail, it makes it feel a little younger. I would now like this in a bright red and cobalt blue please!

Just love the flattering style and fit on this swimsuit. I have purchased a new one from Bravissimo each year and this is the best so far. I have just ordered the same style in black - so have purchased two this year then!

I loved the simple stylishness of this swimsuit and was optimistic it would flatter. It almost did... The fabric is quite thin and the cups have wiring but no structure otherwise...I am not sure if it wasn't quite long enough in the body (so didn't come up enough) or if the cut of the top was just a bit too skimpy for me - but though the cups were big enough I felt unflatteringly flattened and though contained at the front, not at the sides. I um'd and ah'd - but its expensive and I want to feel wholly pleased - so its a no for me.

Really flattering swimsuit! Smooths and flattens the stomach area and is really supportive. Very comfortable to wear! No padding which is great for bigger busts! 10/10!

I love this costume, I can swim without falling out of it and as it isn't sporty in style there is no expectation that I'll swim fast! Smoothes the mum tum out too!

Having put on a few pounds recently I've abandoned the bikinis and gone for more coverage! This swimming costume is a very flattering and non-frumpy shape and I love it. There was plenty of support in the cups and I didn't feel like I was going to fall out of them. I also like the fact the it isn't padded - I've discovered that isn't helpful if you're actually going to swim on holiday - you need to wring your boobs out afterwards - something I'd not considered beforehand! It's quite tight around my hips, but I'm probably closer to a 16 than a 14 on my bottom half right now, so not surprising. I'm 5'7 though, and had to have the straps as extended as possible, so could be a problem if you're any taller than that.