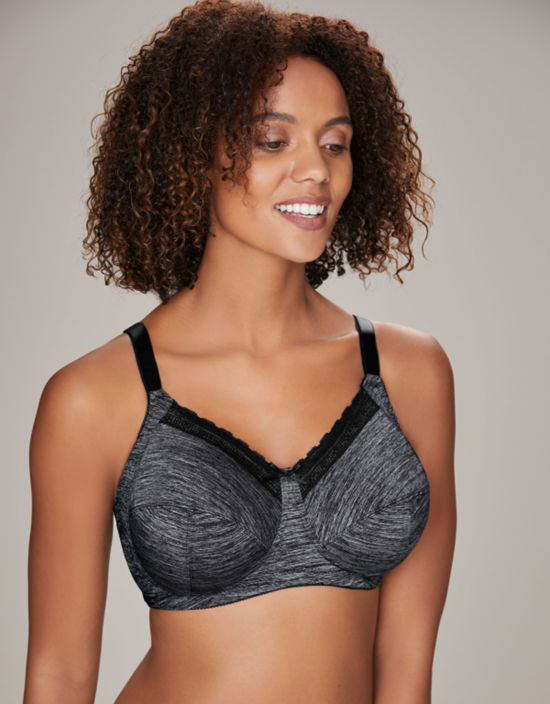 This non-wired bra from Royce offers a natural, separated shape and plenty of support and coverage. The grey marl fabric is super soft and comfortable and the straps are set in towards the centre, so it could be a great option if you find that your straps tend to slip down your shoulders. For other super [comfortable bras](/collections/comfortable-bras/), check out our collection!RO104GML
34GBPInStock
4.461

This non-wired bra from Royce offers a natural, separated shape and plenty of support and coverage. The grey marl fabric is super soft and comfortable and the straps are set in towards the centre, so it could be a great option if you find that your straps tend to slip down your shoulders.

For other super comfortable bras, check out our collection!

This is is a guide only - please call the shop to reserve the item to guarantee availability. Or, you can order the item into your chosen shop so you can try it on using our free Click & Collect service!

or
Browse a list of our shops
write a review
4.4 out of 5 starsfrom a total of 61 reviews

FitAverage rating: 4.4 out of 5 stars

StyleAverage rating: 4 out of 5 stars

True to sizeAverage rating: 3.6 out of 5 stars

I purchased this bra nearly a year ago, but it was so uncomfortable that I had only worn it a handful of times. It left painful red welts where it dug into the crest of my shoulder/armpit area. I desperately needed a good fitting and supportive non-wired bra, but I cannot wear an athletic bra everyday (the girls need some airflow every other day!). This bra does separate the girls, though they do have a weird bullet pointy shape. I can deal with the shape, but not the pain. I decided to alter the bra, and it works great now. If you have a sewing machine, cut the straps off, turn the edges under, and top stitch with a zig-zag stitch (essentially giving more space for your underarm). Reattach the straps. No more pain! This would be an easy pattern adjustment at the factory. Customer service: please tell manufacturer about complaints and this is a small tweak needed - I am not the only person to have made this complaint.

So this is an ok bra for non wired. Yes it's supportive, but gives you a really weird shape. Both boobs point east and west! The shoulder straps could really do with some cushioning. I loved the position of them as I have small shoulders but found the straps to bend and roll into a crease causing red painful welts on the top of my shoulders. Overall it's supportive but definitely needs some re designing for the much larger busted of ladies.

This is hands-down the most uncomfortable bra I’ve ever owned. The edging they use on the bra has tiny loops all around it and it’s stiff as a board. It does not soften at all from wear or washing and it acts like sandpaper on your skin. Doing nothing other than watching a movie results in raw, red marks, especially under my arms. I’ve found this to be true of several bras I’ve purchased from Bravissimo in the past, and it’s telling that they ask for reviews on size, fit and style, but not comfort. The band was a tad on the small size, but still doable, and the cups were a tad on the large size. The support is great, and it’s impossible to get uniboob, like in many unwired bras. It’s ugly as sin to wear though and when you put it on, it looks like the weirdest, almost bullet bra. With a shirt on though, you don’t notice it.

I wanted to like this as it was comfortable. But it made my 32H boobs look very odd, as if they had quarrelled and were pointing away from each other!

I desperately needed some non-wired bras so ordered a selection this was one of two I kept. I like the slightly sporty feel to the design and colour and I like how much support it gives me. No, its not the same as wearing a wired bra, but with the benefit of no wires the support it gives is more than enough. I would never leave the house without a bra and didn't think I would without wire, I thought it would be an indoor bra but I was wrong. Holds and shapes well enough to be worn out without feeling self-conscious. Only comment was the 34 was a small 34, I had some back extenders and will use them rather than return it as I need to loose some weight.

I totally love this bra. It is the most comfortable bra I have ever had - but why oh why is it only available in grey? This is the most unlikely colour for a bra. Please can you make this bra in other colours? Particularly a white or nude for the summer months under light coloured tops.

I was so hopeful about this bra - having read the reviews. I was very disappointed. I thought a good non wired bra would be comfortable and supporting. This was neither. The support was taken up by the straps only, which made me feel heavy and uncomfortable. The cups made my boobs stick out either side, which was a very unflattering look under clothes. My boobs seemed spread over the front of my body. I have sent it back.

I bought three different soft bras to help with recovery from laparoscopy. I returned this one. It looked like it would be great for separation and it really was - the holy grail in soft cups. However it puckered and bulged in odd ways across the centre of the cups which wasn't very flattering. I don't think it was too big a cup size as it wasn't baggy. It seemed to be the shape of the cup, a bit 1950s pointy. Would be better with more colour options but only if you have the right shape breast to fit this cup.