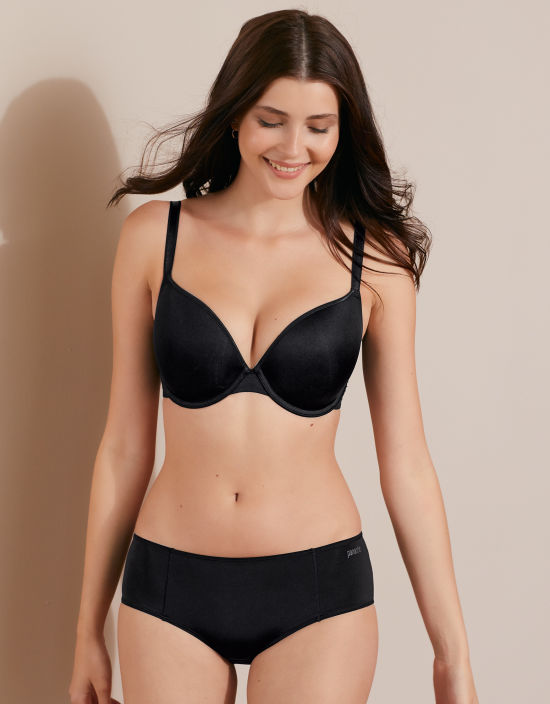 The cups have been updated on this Bravissimo girl favourite, so they’re a little bit firmer and more covering. If you’re looking for a super-supportive and smoothing t-shirt bra, this lightly padded plunge might be one to try. The low centre means that it’s a fab option to go under all your favourite V-necks and you can cross the straps over at the back – bonus!PN176BLK
36GBPInStock
Porcelain Elan Plunge Bra in Nude by PanacheChampagnePanachehttps://www.bravissimo.com/products/porcelain-elan-plunge-bra-pn176/#champagne-pn176nud

The cups have been updated on this Bravissimo girl favourite, so they’re a little bit firmer and more covering. If you’re looking for a super-supportive and smoothing t-shirt bra, this lightly padded plunge might be one to try. The low centre means that it’s a fab option to go under all your favourite V-necks and you can cross the straps over at the back – bonus!PN176NUD
36GBPInStock
3.712

The cups have been updated on this Bravissimo girl favourite, so they’re a little bit firmer and more covering. If you’re looking for a super-supportive and smoothing t-shirt bra, this lightly padded plunge might be one to try. The low centre means that it’s a fab option to go under all your favourite V-necks and you can cross the straps over at the back – bonus!

Unsure what size to buy?
write a review
3.7 out of 5 starsfrom a total of 12 reviews

Fit & supportAverage rating: 4.1 out of 5 stars

StyleAverage rating: 4.1 out of 5 stars

True to sizeAverage rating: 4.4 out of 5 stars

I have just received this bra today and I am very pleased with it. There's no frills or lacy bits just a supportive and comfortable bra that looks great under a t shirt. As someone who likes a plain and practical bra this ticks all the boxes. It has even passed the running up the stairs test with flying colours! I have never bought a Panache bra before but I am so pleased with this one I have just ordered it in black as well.

I am probably repeating what others have said already - this has been my go to for 10 years but this iteration is terrible. Underwriting comes through within a couple of months and the straps are a comedy exercise in inadvertent stripping. Nothing seems to make them stay in the loops for long - seriously irritating.

I have bought this bra for a number of years, but the last one wasn’t the same quality and reading the reviews I wasn’t alone in my views. So when I needed to replace my nude Porcelain Elan bra I chose a different style and I was disappointed, so I went online to use the chat for help to buy a t-shirt bra. What fab service. Despite my concerns, I was assured that this bra was back to a good shape and quality far better than my last experience with this bra. I wasn’t disappointed. The shape is back to a moulded style and it is true to size and very comfortable. Well done Bravissimo and to the excellent customer service girls who I dealt with deserve some credit. Back to being a happy customer.

I bought this bra after being fitted in store, it was exactly what I needed, after my bras from another store kept getting too loose after a couple of weeks of owning them, as it keeps its shape well and offered strong support. I was very happy until the underwire popped out. However, Bravissimo were great and sent a replacement straight away and a return label for the bra and my new one was equally as good until now, two months after, it's under-wiring is starting to appear through the fabric and I am sure it will soon pop out. I would understand if I had not had a fitting as this could have been my fault for choosing an incorrect size but I bought the size the fitter recommended which does fit really well and comfortably so I can only conclude this issue is a design fault with the fabric used around the underwire. Bravissimo now want me to send it back leaving me without an alternative for that time unless I buy another which is not very helpful, very disappointed as think I will have to change styles and risk the same issues I was having before.

I have worn this bra for over 10 years in various iterations and loved them all. The recent re-design however is awful. Instead of a forward shape, my boobs disappear outward towards my armpits, making me look an odd, flat broad shape. I'm very disappointed, especially as I bought one of in each colour that are totally unwearable in public. The new strap design is ridiculous too. They have come undone on more than one occasion, meaning I have to get undressed to remove the bra to re-attach the strap into the hook. Honestly, whoever designed this one needs sacking.

What’s happened.. this bra has changed and is more frumpy and not as soft on the padding to what it was. This was the only bra I would wear for everyday, now I’m going to have to find something to replace. What a shame. Please please go back to the old shape, fit and materials. Why change something that did not need changing.

First thing I noticed when I tried the bra was how comfortable it was. It is very flattering under clothes and gives a very smooth uplifted appearance while not looking like you are wearing a heavily padded bra. The ability to change the straps to a criss cross at the back is also an added bonus. Although the bra is nothing fancy it is a very practical garment to have and I am very happy with the purchase.

Not the fanciest bra in the world, but it's exactly what I wanted. Sturdy with no padding, unobtrusive while still supportive. In a perfect world the band would be wider and there'd be at least one more hook (this bra has two hooks) but even so it's not lacking in any department. I forget about it the moment I finish getting dressed and only remember it when it's time to come off. If you want to be absolutely apathetic about your bra during the day, this is the bra for you. Buy it. Feel nothing. Move on.